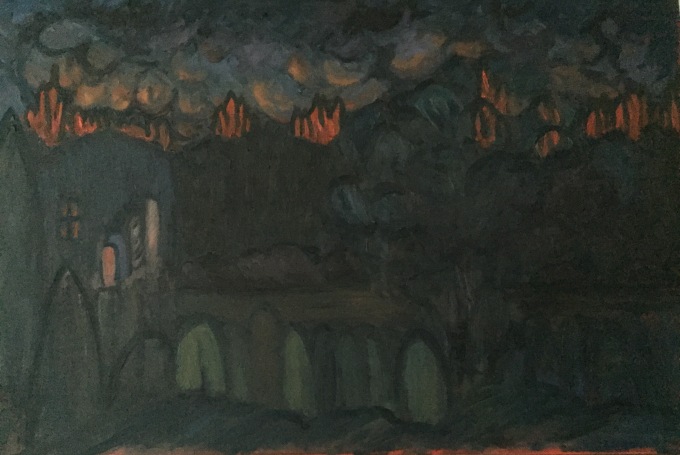 Now a week old, the Detwiler Fire has consumed 76,000 acres and is only forty percent contained. The windswept fire rages in the foothills, feeding on dry brush that grew intensely during our rainy winter. The fire has devastated a section of California State Route Forty-nine and threatens two historic Gold-Country towns Coulterville and Mariposa, the gateway to Yosemite. These places names trigger sweet memories of friends and shared adventures along the Don Pedro Reservoir, the Merced River, Yosemite Valley and the Eastern Sierras.

Fire, is a natural part of ecosystems. For many trees, such as the Coastal Redwood or the Giant Sequoia, fire opens seed cones required for germination. Simultaneously, fire helps clear-out dead wood and thus provides nutrients necessary for new plant growth. As towns and cities grow, encroaching upon once remote wilderness, human homes and livelihoods are increasingly threatened during fire season. But, when a wildfire rages, threatening your community, it is difficult to ponder the benefits to the natural ecosystem. You only pray the firefighters working night and day can save your home from advancing flames. The work of generations, the evidence of a lifetime’s progress, can be lost within seconds to fire. The poet Robinson Jeffers wrote in his poem Fire on the Hills

Under the smoke in front of the roaring wave of the brushfire;

I thought of the smaller lives that were caught.

Beauty is not always lovely.”

Dust to dust: when catastrophe strikes we experience the harsh reality of how quickly life can change; we begin to comprehend that humility as a means of survival; and we ask ourselves the question what really endures?

Friday, my dear friend and I visited the Carmel home of Robinson Jeffers and his beloved wife Una. Apprenticed to a stonemason, Jeffers built his house, Tor House, and then later, working solo, built Hawk Tower. Jeffers personally chose and hauled each stone up from the beach to craft these dwellings. Jeffers understood ancient stones – when listened to – share the song cycle of wind, water and fire tirelessly grinding granite to sand over the eons. The stone circles at Callinish and Achmore on the Isle of Lewis, placed by Neolithic peoples, have stood for some four thousand years, surviving wind, water and fire as well as the follies of mankind. These stones have survived, and are now artifacts, surviving evidence of a people’s existence. Jeffers wrote in his poem Tor House

“If you should look for this place after a handful of lifetimes:

Perhaps of my planted forest a few

May stand yet, dark-leaved Australians or the coast cypress, haggard

With storm-drift; but fire and the axe are devils.

Look for foundations of sea-worn granite, my fingers had the art

To make stone love stone, you will find some remnant.”