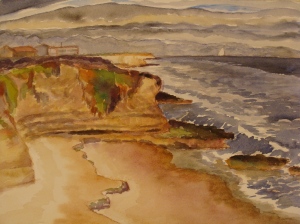 Reached from our hilltop campus by a swift bike descent, UCSC’s Long Marine Laboratory rests on the cliffs overlooking the Monterey Bay National Marine Sanctuary. Today I cycled part of the Empire Grade and then spun quickly back down to the sea to visit the lab’s Seymour Marine Discovery Center. A research and teaching center, “Long “is renowned for innovative marine mammal research. Walking along the cliffs searching for a spot to paint, I was greeted by the sounds of the ebbing tide and the snowy plovers dancing along the water’s edge. Hard at work in search of nourishment, sea otters and bottlenose dolphins swim in the silver-white waves below me and pelicans glide searching for fish just above the whitecaps. It was late in the afternoon and mostly overcast but from time-to-time the clouds broke and the cerulean blue sky peaked through allowing sunlight to stream from above infusing distant cliff sides with a glow seemingly from within.

My visual experience is beautifully expressed by Santa Cruz resident, writer James D. Houston, who wrote Where Light Takes Its Color From the Sea, a series of essays about place inspired by the California landscape. In an essay titled “The View from Santa Cruz” Houston wrote “in later afternoon the light turns the bay white…the sea, as much as the light, gives this curve of coast its flavor. The light takes its color from the sea, sometimes seems to be emerging from it. And the sea here is ever-present. On clear days it coats the air with a transparent tinge of palest blue that salts and sharpens every detail…the slow process of erosion has left many colored cliffs – yellow, buff, brown and ochre. Each striated layer reveals the pressed sand of beaches eons old. Sometimes in the low sun of an autumn afternoon they turn orange and glow like the horizon itself.” With his wife Jeanne Wakatsuki, Houston co-authored the memoir Farewell to Manzanar. The Japanese Internment Camp Manzanar, located in the Eastern Sierras, resides in the shadow of my majestic friend Mt. Whitney.

The Monterey Bay National Marine Sanctuary is so precious; we must ensure its continued existence through direct stewardship and consciousness raising actions. On Sunday September 21, 2014 citizens from over 150 countries took part in a consciousness raising action for the environment and social justice, participating in a global People’s Climate March. Largely ignored by the mainstream press, Ben Wikler host of MoveOn.org ‘s “The Good Fight” has chronicled the march in his podcast which can be listened to in iTunes or through the web at “inside the ginormous, huge-tastic climate march.”