After a year confined, while Shiva created and destroyed, the open road beckoned. The horizon open, the land infinite, and my mind seemed lotus-like, unbound.  And Earth shared: sky, mountains, trees, deserts, meadows, and rivers. My soul replenished: hope glimmers.

Patiently we live stream, waiting for Wek’-Wek’ the last Peregrine chick to fledge from Sather Tower.

On nearby Evans Hall, his brothers Fauci and Kaknu, and his parents Annie and Grinnell encouraged the youngster to join them.

At last, “this bird has flown.”

So the story ends, and so it begins.

In this our lost year-of-Covid, Annie and Grinnell have raised two families and unknowingly shared their intimate life with a world of humans.

In darkest March 2020, these beloved Peregrines were a gift to the imagination when four walls defined our world. With joy we watched as Annie laid her eggs, the chicks hatched, devoted parents provided food for their brood, and Grinnell kept the chicks warm at night while Annie took her rest. And then with excitement, in May 2020, we watched as the brothers Sequoia and Redwood flapped their wings, caught the wind and soared for the first time. And a few days later, with her brother’s encouragement, Poppy joined them and was airborne. And all was delight.

Another year has passed, and another family raised and fledged. Annie and Grinnell we thank thee for showing us that dedication and devotion will guide us through the darkness. Until next year dear Peregrines, good hunting and fair winds.

humming truck tires on Highway One drowned by the Pacific

clockwork of tides, migration of whales, and nesting of birds

sheltered by a windswept fir

yet swamped after the storm

how precious the life of a peregrine

The Right to Vote is ephemeral.

It is as fragile as a butterfly.

It must be protected, or it becomes extinct.

It is fragile and easily destroyed.

And it is difficult to restore what has been lost.

We are not separate from the world.

The path you make is on dirt shared by others.

All remarkable, mysterious and precious as you.

Thank you for the hummingbirds…a glimmer of hope we cherish in our gardens.

Hear our votive prayer for the bird souls, thousands dead in New Mexico, victims of the wildfires fueled by climate change:

“And when bird song is gone will earth be the only witness?

Will only rocks grieve the absence?”

Do we pray for a miracle

awake from the dream that our world consists of disconnected beings?

the fate of habitats

in the path of hubris?

37 days until we exit the Paris Climate Agreement.

The fate of communities

…..who serve our country, grow our food, heal our sick, pay their taxes

in the path of progress?

“Artists render things.” In my case, landscapes, cityscapes, human figures, combinations of artifacts, and even toys are rendered on canvas as they appear to me. Selecting a subject to paint calls upon both external and internal factors. Shapes, volumes, colors, and textures engage my senses – establishing my experience of the “thing” – while simultaneously my subjective connections, associations, and memories open a hailing frequency. For children (and grownups) toys (and art) are gateways to worlds we imagine where we are inspired to create a balance between what we observe and what we experience. And so play, and in this case, a painting, begins.

There were twelve toy animals on the table; the one that spoke loudest to me was the Bison. Though only inches in height and width, the expertly modeled Schleich toy called to me. I was captivated by the massive strong body, the tones of sepia, burnt umber, and yellow ochre, and the sense of the thick shaggy fur. Instantly my mind surfaced thoughts of John Muir’s wilderness and my associations with ecologically minded indigenous peoples, capitalist resource exploitation, and land stewardship combined with my memories of hiking and camping. I could easily imagine the cloud of breath released from the Bison’s nostrils on a cold winter Yellowstone morning. The “thing” reached out, grabbed me, and as all good toys do, brought a joyous smile to my face.

The German philosopher Immanuel Kant believed “humans were like citizens of two worlds, occupying both the world of the Ding an sich (the thing-in-itself) which was the external world, and the internal world of one’s perception (how things appeared to individuals).” According to Kant “when we experience an object, it becomes a thing-as-it appears-to-us. Our senses as much as our reason are like tinted spectacles through which we perceive the world.” [1]

The world, unfortunately through other spectacles, is gritty and grim. I read this morning about how the Bison herds in Yellowstone Park are managed.[2] Because this is the sole remaining place in the United States where the public can experience bison living free-range, sustainable herd percentages are identified (4800), and numbers beyond the benchmarks are destroyed by capture and slaughter or by hunting. Range management is rational, and yet I weep at the loss of numbers realized through our ongoing conquest of the planet. “According to the naturalist Ernest Thompson Seton, North America at the time of Columbus was home to sixty million bison, thirty to forty million pronghorns, ten million elk, ten million mule deer, and as many as two million mountain sheep…incredible to imagine today, bison roamed from New York to Georgia.”[3] 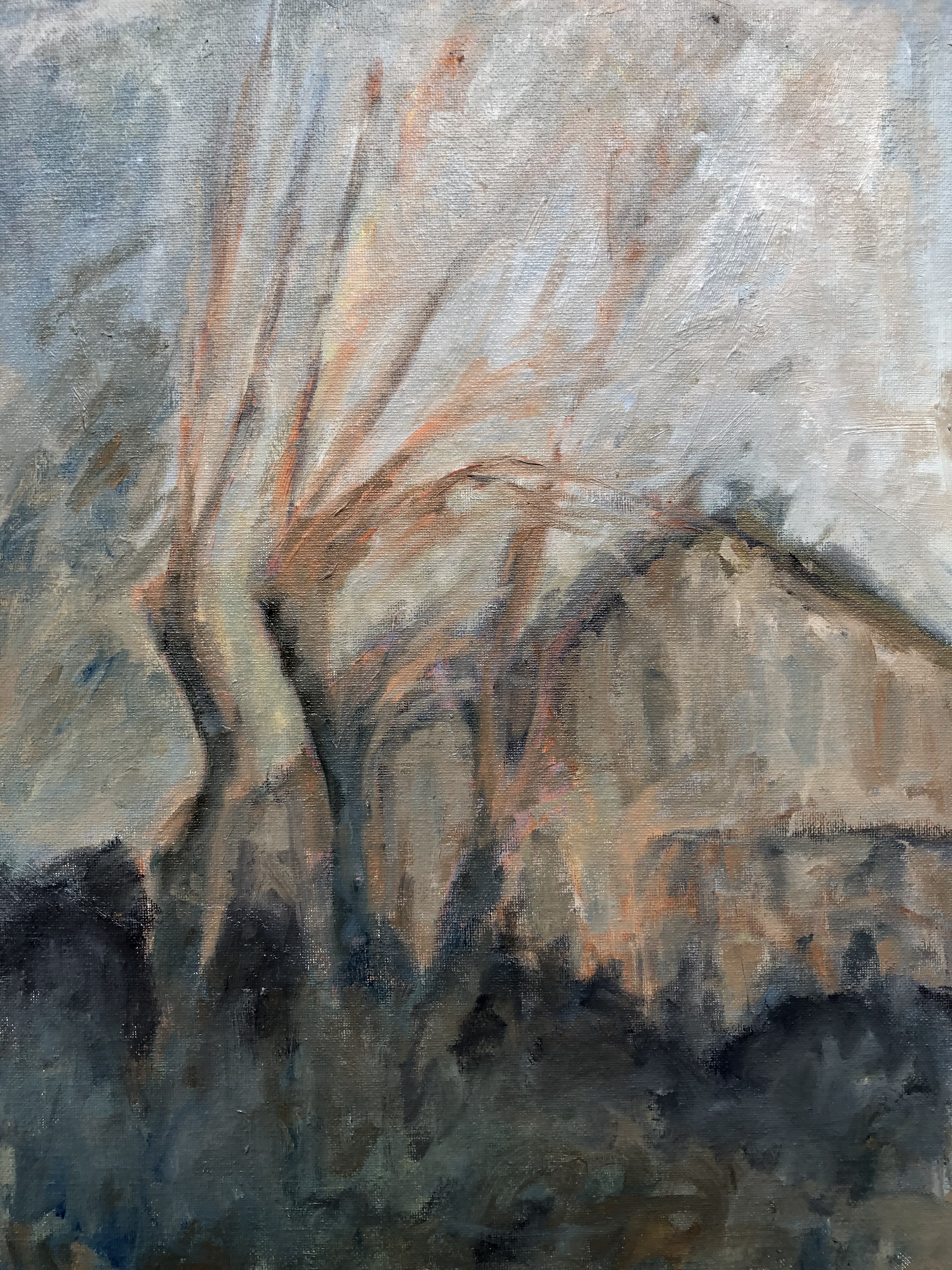 January nights remain long and chilly, but the sun grows warmer with each day. Some months from now, our tiny Oakland orchard of apricot, fig, plum and pear will provide a wonderful harvest. With luck, we will have a bountiful year blessed with cakes and pies and many jars of jam and preserved fruit. But should we have a premature spring, early blossoms may be lost to windy Pacific storms, severely limiting our harvest. Never one to give up hope, I gaze at the trees and pray they adapt to humankind’s “gift”: climate change. Sitting in their presence, I am reading, captivated by Richard Powers‘ novel The Overstory. In the book, one of the characters, Forestry scientist Patricia Westerford, writes about and speaks of the Giving Trees:

“…she remembers the Buddha’s words: A tree is a wondrous thing that shelters, feeds, and protects all living things. It even offers shade to the axmen who destroy it…love for trees pours out of her – the grace of them, their supple experimentation, the constant variety and surprise. These slow, deliberate creatures with their elaborate vocabularies, each distinctive, shaping each other, breeding birds, sinking carbon, purifying water, filtering poisons from the ground, stabilizing the micro climate. Join enough living things together, through the air and underground, and you wind up with something that has intention. Forest. A threatened creature…People aren’t the apex species they think they are. Other creatures – bigger, smaller, slower, faster, older, younger, more powerful – call the shots, make the air, and eat the sunlight. Without them, nothing.“

alive in the sea of information
Blog at WordPress.com.
Loading Comments...