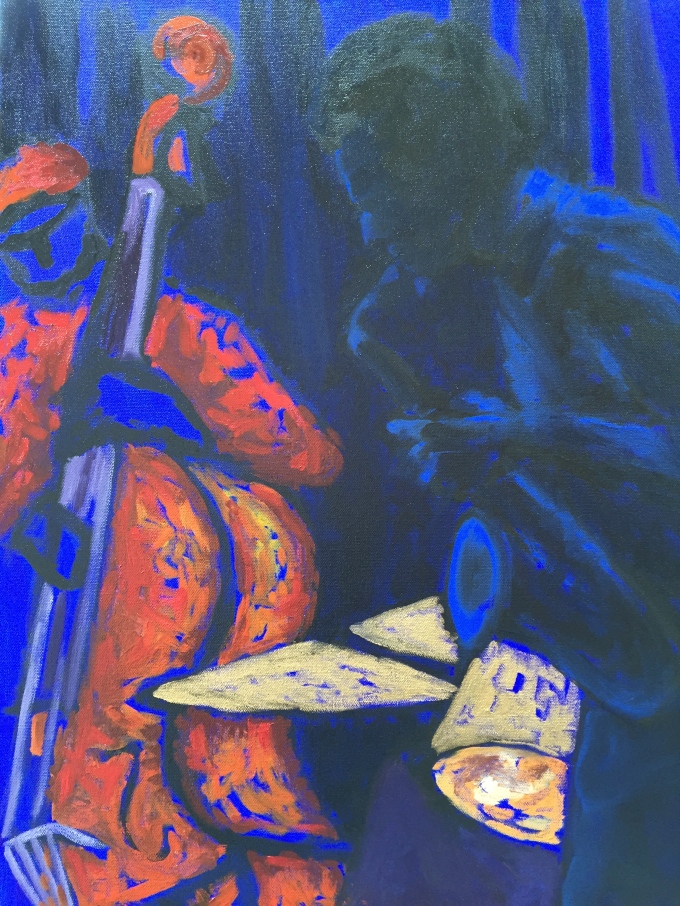 It starts with the sound of a gong, and the tenor saxophone begins to glide like a hawk soaring on the winds. The piano an asymmetric counterpoint, a successive burst on the cymbal, and then the foundational heartbeat of the bass begins, the vibrations a syncopation. Led by John Coltrane on sax, Elvin Jones on drums, McCoy Tyner on piano and Jimmy Garrison on bass, exalted and soared. A Love Supreme, was born. A masterpiece in four movements: Acknowledgement, Resolution. Pursuance, Psalm; a spiritual path. Elvin Jones wrote “every time someone hears it, that music touches them somehow, even people who are churchgoers and have always thought that popular music or jazz was influenced by the devil.” John Coltrane wrote a benediction in the album’s liner notes: “I will do all I can to be worthy of thee o’ Lord. It all has to do with it…thought waves – heat waves – all vibrations – all paths lead to God. His way – it is lovely – it is gracious – it is merciful…one thought can produce millions of vibrations and they all go back to God. Everything does.”

Last weekend I read Dr. Paul Kalanithi’s When Breath Becomes Air; a book with tremendous impact in which Dr. Kalanithi grapples with the meaning of life when diagnosed with a fatal cancer.  Cherishing every moment with his wife and baby, he closed with the following: “everyone succumbs to finitude. I suspect I am not the only one who reaches this pluperfect state. Most ambitions are either achieved or abandoned; either way, they belong to the past. The future, instead of the ladder toward the goals of life, flattens out into a perpetual present. Money, status, all the vanities the preacher of Ecclesiastes described hold so little interest: a chasing after wind indeed.” Instead of chasing the wind, may we soar on the wind, exalting in each moment’s wonder as we travel our spiritual path. 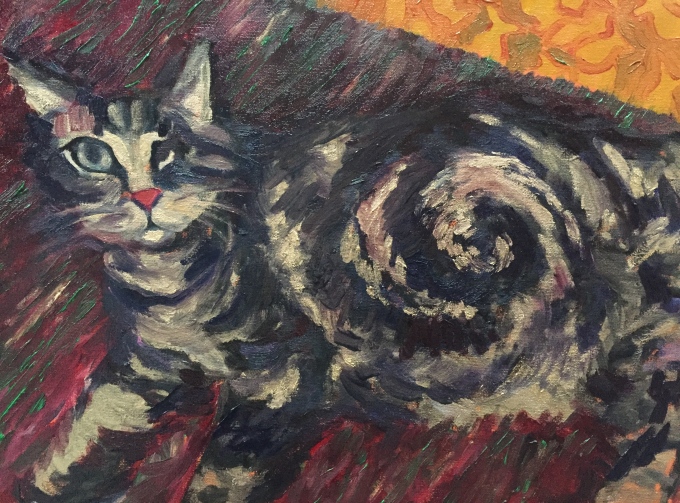 A cyclops is Eye ra the cat. Was he born so? Or when a young rake did he fall in with a bad lot and pay the price, tempted by their kind overtures and promises like poor Polyphemus wined and dined by Odysseus? We never heard Homer’s saga sung from the cyclops view. His impairment troubles Eye ra not, nor does his low-pressure like tabby stripe. No clouds or storms torment him, the sun shines from his soul, but toned with a mischievous humor. Describe Eye ra thus: laidback with a quirky twist of happiness; the epitome of the hipster cat; a born jazz player, always read to riff. Top Cat, the indisputable leader of the band. To a syncopated beat, I chant Eye ra, Eye ra, Eye ra, Eye ra, Eye ra. 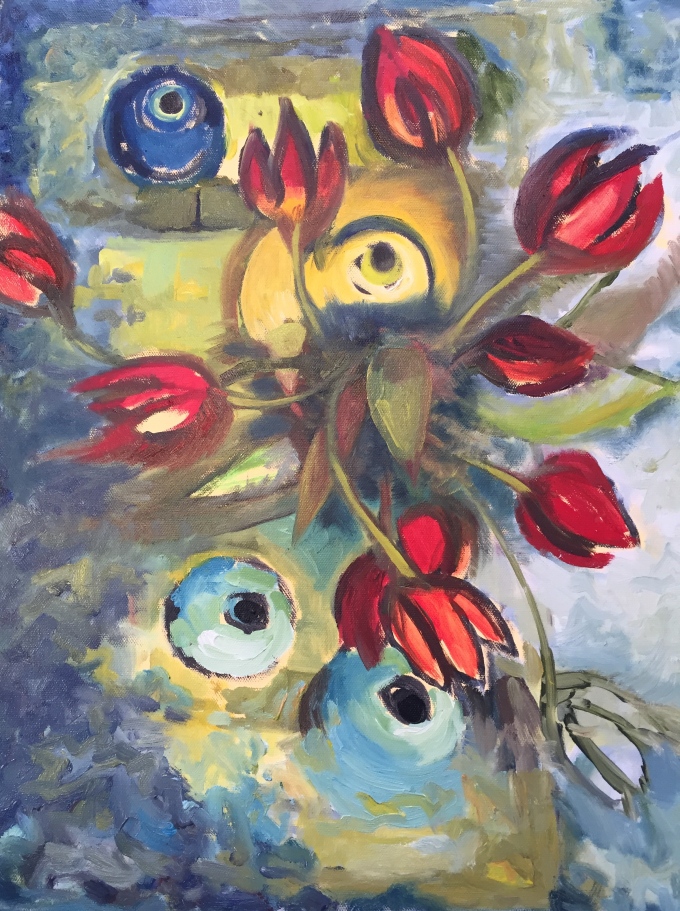 Spring finds flowers in the house. Deep red tulips on the table; arranged with Heath ceramic vases of yellow, light grey and pale blue against a cloth of blue grey and green gold. Typically the landscape calls me to interpret the experience in paint. I choose the joy of sensing the world: feel the sun, smell the lavender, taste the sour grass, hear the redwing blackbird, and watch the trees bend in the wind. But the feast of colors on the table, the bold red, the pale green gold and vibrant blue grey charmed me. I was on borrowed time. The flowers would not last long, I needed to paint now. I began.

Last week, Darcy Grimaldo Grigsby lectured on plein air and urban landscape painting as part of her course Western Art from the Renaissance to the Present. Grigsby relayed a woman painter, of a respectable class in the 19th century, who lived in the world and was of the world was living on borrowed time. She would not be respectable for long if she stepped beyond her sphere and assumed the life of a flaneur. Berthe Morisot, the great French woman Impressionist painter was confined to painting the women’s sphere, and when she strayed outside to paint, her subjects were limited, and she was chaperoned. Charles Baudelaire (possibly describing his friend the painter Edouard Manet) wrote in The Painter of Modern Life (1863) the crowd is [the artist’s ] domain…to be away from home and yet to feel at home anywhere; to see the world, to be at the very center of the world, and yet to be unseen of the world…the observer is a prince enjoying his incognito wherever he goes.” The princely life was not possible for the 19th century woman painter, so she remained at home painting the inside world of children and flowers. Morisot admired and identified with the women painter Marie Bashkirtseff whose diaries are quoted in Jeffrey Meyer’s Impressionist Quartet, “what I long for is the liberty to ramble alone, to come and go, to seat myself on the benches in the garden of the Tuileries, and especially of the Luxembourg, to stop at the artistic shop windows, enter the churches, the museums, to ramble at night in the old streets, that is what I long for, and that is the liberty without which one can not become a true artist.”

Until I fell head-over-heels for the red tulips, I did not grasp the charm of a still life; I am a woman of my time, a woman of action, always moving, never still. In the 21st century, with my respectability intact, I can paint the world or paint my home, whenever I chose, whenever I choose. I can ramble at night in the old streets, and never on borrowed time.