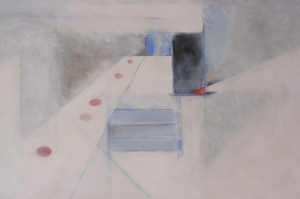 This spring and summer we’ve made three trips to Southern California. Crossing “the Grapevine” through the Tehachapi Mountains I am filled with glorious anticipation of the descent into the Los Angeles Basin. Why such excitement?  Perhaps it’s my fascination with the contradictory juxtapositions of the place and it’s history, and the palpable tensions. But then again maybe some of the appeal comes from aesthetics; something as simple as the light.  Carey McWilliams, in Southern California: An Island of the Land, wrote “a desert light brings out the sharpness of points angles and forms…..but let the light turn soft with ocean mist, and miraculous changes occur…..but this is not desert light nor is it tropical for it has neutral tones. It is Southern California light and it has no counterpoint in the world.” There is a quality of light in Los Angeles and Southern California that is born from the relationship of desert, sea and the impact of humans (and the pollution we make) on the environment.

Years ago I read a February/March 1988 New Yorker article “L.A. Glows: Why Southern California doesn’t look like any place else.” Lawren Weschler tried to capture this sense of light with anecdotes from scientists, writers, and architects. Caltech Professor Glen Cass gazing north towards the San Gabriel Mountains identified a bright, white atmospheric haze.  Cass said “on some days there can be billions of particles in the line of site between me and the mountain – each of them with the mirrorlike potential to bounce white sunlight directly back into my eye.” The poet Paul Vangelisti said “for one thing, I think the light of L.A. is the whitest light I’ve every seen,” and the Pritzker Prize winning architect Coy Howard said …..it’s not exactly a dramatic light…..if anything its meditative…..when you get the kind of veiled light we get here more regularly you become aware of a sort of multiplicity – not illumination so much as luminosity.  Southern California glows…..and the opacity melts away into translucency, and even transparency.”

On these southern voyages, we’ve made it a point to have encounters with the work of artists and architects working in and inspired by the Los Angeles basin, such as Richard Diebenkorn, who I blogged about in April.  Most recently we’ve seen the pale, soft and transparent light of Southern California play against buildings designed by Rudolph Schindler and Richard Neutra in Los Angeles, Orange County and San Diego.  Friends, colleagues and rivals they both came to Los Angeles after WW I from Vienna, Austria where they had individually studied with Adolf Loos and Josef Hoffman.  Making their ways separately to California, Schindler worked for Frank Lloyd Wright and Neutra for Eric Mendelsohn in Berlin.  Collectively, they practiced the concepts of modernism or the International Style in Southern California when these were still revolutionary ideas. Schindler and Neutra both designed homes for Philip and Leah Lovell; Schindler designed the Lovell Beach House in Newport, California and Neutra designed the Lovell Health House in the Hollywood/Los Feliz neighborhood of Los Angeles. Both buildings are inspiring examples of innovation in materials (concrete and steel) and the architect’s use of space, form and the importance of light to the structure creating a sense of transparency between the interior and the exterior so characteristic of what would become the post-WWII California lifestyle.  Each building is a monumental work of art, but miraculously each structure lay easily and understatedly upon the landscape. In the case of Schindler, the eye of the viewer is lifted skyward into the light by concrete frames lifting the house above streetlevel; whereas with Neutra, the house is nestled within the canyon contours firmly anchored but appearing to gently to float cloudlike hugging the landscape.  Each home – considered historic structures in the story of California’s architectural past – remains a meditation of light upon the land.