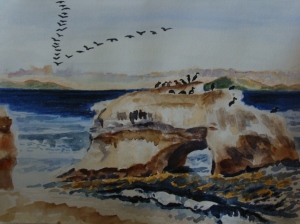 Wind and wave carved the barrel vault through which the tides pass. Frieze-like, cormorants and pelicans adorn the rock’s surface. Just offshore Santa Cruz, this nature-made arch stands proudly like a monument to stewardship of the Monterey Bay Marine Sanctuary. A bridge for centuries, the 1989 earthquake took only seconds to sculpt the arch from a span called Natural Bridges. Out in the bay waters, humpback whales feast on schools of anchovies. Early evening, living on the edge of the Pacific plate, my friend and I paint quickly attempting to capture this fleeting perfection with our brush marks. Thousands of miles away, seismic politics bring violence and death to innocents in Gaza and Ukraine airspace. All is suffering. A few lines from Robert Hass’ poem Bush’s War published in his book Time and Materials capture my sadness at this suffering:

“Someone will always want to mobilize

Death on a massive scale for economic

Why do we do it? Certainly there’s a rage

To injure what’s injured us. Wars

Are always pitched to us that way…

The violence, it’s a taste for power

That amounts to contempt for the body…”

The history of all conflagrations ultimately includes the tallying of the dead, the wounded and the maimed. But they never tally the loss for the living. The black fonts on the white page cleanly mask the suffering. Colm Toibin’s closes The Testament of Mary with a conversation between Mary, the mother of Jesus, and a disciple, unidentified but likely John, one of the four evangelists. Mary spoke, her words brimming with her son’s suffering on the cross “I was there, I said. I fled before it was all over, but if you want witnesses then I am one and I can tell you now, when you say that he redeemed the world, I will say that it was not worth it. It was not worth it.”

Sometimes we paint to stave off despair. Chiura Obata the great Japanese American painter of Yosemite and the Sierras was interned at the Topaz War Relocation Center in Utah during WWII. Obata painted and wrote about the power of nature to absorb the scars of war. Writing about his series of Hiroshima inspired watercolors, Obata said “there is always harmony in nature, a balance between the dead and the living, between destruction and resurgence.” And so I rechristen Natural Bridges as Natural Arch, a monument to the cycle of life and to harmony, seeking balance between conquest and stewardship.