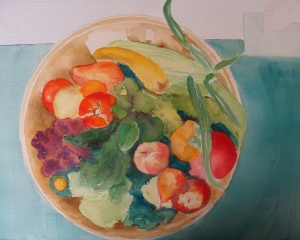 Alan Chadwick was a master gardener and major influence on the birth of organic gardening in California. A teacher at UC Santa Cruz in 1967, he started the Chadwick Garden, where he cultivated the minds of many students minds and the seeds of the organic movement in California began to blossom.  UC Santa Cruz Professor Paul Lee wrote about Chadwick’s legacy in his book There Is A Garden in the Mind: A Memoir of Alan Chadwick and the Organic Movement in California. Stephen and Gloria Decater were students of Alan Chadwick; Stephen studied with Chadwick at UC Santa Cruz and followed him to learn and teach in Covelo, California where the master gardener briefly tended another Chadwick Garden reaching more students including Gloria. A living legacy was nurtured and blossomed in Covelo as Live Power Community Farm (LPCF), tended over the years by Stephen and Gloria, their sons and apprentices.  For almost three decades, we have been weekly share holders in LPCF, benefiting from the teachings Alan Chadwick gave his students. Every Saturday morning, the week’s harvest was delivered by the Covelo farmers to San Francisco where our community members sorted vegetables and fruit, flowers and eggs, grains and meat, delivering the weekly basket bounty – a cornucopia – to eager share holders like us. It has been a blessing: shared by Stephen, Gloria and the land. And for this we give our deep thanks for the love you, Stephen and Gloria, have given the land, and the sustenance of “bread” and teachings you have shared with us over the years. With your patient love and guidance we have become better stewards of both the land and the creatures, great and small, graced with walking her gardens. Amen.