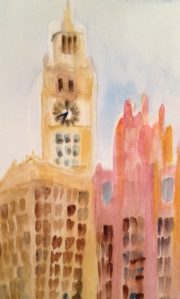 From a distance, the sprawling city of Chicago soars from the flatlands like the emerald city of Oz.  So accustomed to California’s topography  — rugged coastlines, deserts and mountains honed by earthquake and tide, wind and rain — I am enchanted by the Midwest with it’s boundless horizon punctuated solely by skyscrapers; bold sentences spoken by vertical and horizontal voices. My profession brought me earlier this month to Chicago, home of the Society of American Archivists (SAA), serving on the program committee, shaping our summer 2013 annual meeting. Early Sunday morning I walk Chicago’s streets awestruck by the artistry of the built environment. Sunrise flirts momentarily on the glazed terra cotta, accessorizing these temples of industry in pink and orange. Laura Tatum’s spirit accompanies me as I walk amongst these towering icons of American architecture on my way to the meeting. Chicago, a living building museum, graced by artifacts in a range of styles, created by Daniel Burnham, Louis Sullivan, Frank Lloyd Wright and Mies Van Der Rohe.

A prairie city, Chicago is home for corporations monetizing the labor of farmers and ranchers and now profiting from the labor of programmers and analysts. Migrants of all nationalities, races, and creeds – from all compass points – came to Chicago to work in factories and services spinning straw into gold (turning raw into retail). Barrack Obama, our first African-American President and native-son of Hawaii, elected last week for a second-term, like so many others was drawn to Chicago and makes his home here – this land of Lincoln. The 1871 Chicago Fire wiped the slate clean and a new city rose on the shores of Lake Michigan giving birth to the skyscraper, a building type made possible primarily by the manufacture of inexpensive steel able to frame and support multi-storied structures. Chicago architect Louis Sullivan considered by many the “father of skyscrapers” coined the phrase “form follows function.” These skyscrapers were and remain today the home offices for many corporations.

My hotel room, situated above the Chicago River provided wonderful views of North Michigan Avenue’s Wrigley Building and Tribune Tower. Built in 1921 in the neoclassical style, the Wrigley Building, an early skyscraper sheathed in white terra cotta, glows when lit at night. Personally, it provides a visual and stylistic reminder of the buildings populating Burnham’s White City also-known-as the Chicago World’s Fair. Across the avenue, is the Tribune Tower, a product of the 1922 international design competition held by the Chicago Tribune newspaper. While this gothic-revival design won, the competition inspired many modernist architects to envision skyscrapers in the emerging international style.  One of these young architects, Mies van de Rohe, soon to become a “master” at the Bauhaus and its last Director, submitted a visionary design for a Tribune Tower with transparent plate glass walls on a steel frame. Known for his clarity and simplicity, Mies, is perhaps most famous for his Barcelona Pavilion and Villa Tugendhat. Given the outcome of the Tribune Tower competition, it is somewhat ironic that Mies would become the Director of Chicago’s Illinois Institute of Technology bringing his “less is more” design aesthetic to what is now known as the Second Chicago School of architecture.