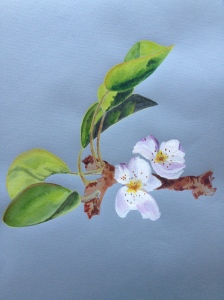 Ry and Bhatt by the River. *

*References the 1993 album A Meeting By The River, a collaboration by Ry Cooder and Vishwa Mohan Bhatt; the album contains the song “Isa Lei,” the Fijian song of farewell that Ry Cooder learned playing with the renowned Hawaiian slack-key guitarist Gabby Pahinui.  I’ve been listening to Meeting By the River many mornings here in Santa Cruz while watching the beautiful asian pear tree in the garden outside my window greet the Spring.

“The Rivers of Texas” is an old cowboy song that mentions fourteen rivers in the Lone Star state; Lyle Lovett recorded his version  – The Texas River Song –  on the album Step Inside This House. My good friend Bill tells me Townes Van Zandt also recorded this classic. This excerpt of lyrics comes courtesy of Verne Huser’s book Rivers of Texas:

“We crossed the broad Pecos and we crossed the Nueces, Swam the Guadalupe and followed the Brazos; Red River runs rusty; the Wichita clear. Down by the Brazos I courted my dear…The sweet Angelina runs glossy and glidey; The crooked Colorado flows weaving and winding. The slow San Antonio courses the plain. I will never walk by the Brazos again.”

Nomadic by circumstance, or maybe I just like driving, I am on the road again, speeding northward into the oncoming night from San Antonio towards Austin and Waco.  I laugh out loud recalling an essay in High Country News by John Daniel; in A Word In Favor of Rootlessness he wrote “marriage to place is something we all need to realize in our culture, but not all of us are the marrying kind…it makes me very happy to drive the highways and back roads of the American West, exchanging talk with people who live where I don’t, pulling off somewhere to sleep in the truck and wake to a place I’ve never seen.” Out my side window, I search for the “Old Yellow Moon,” Emmylou Harris and Rodney Crowell croon about on my CD player.  Running north – south, I-35 intersects a series of rivers crisscrossing Texas roughly north-west to south-east; I catalog them in my mind: San Antonio, Guadalupe, Colorado and as I get closer to my destination the tributaries to the Brazos including the Leon, San Gabriel and Little Rivers and of course Salado Creek. 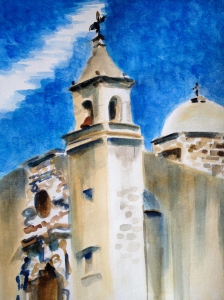 This year, Texas like many places in the Western and Midwest United States is suffering from drought. Not enough rain is falling to soak into and heal the land, fill the reservoirs and aquifers and bless the riparian areas providing a respite to migratory birds and a home for wildlife along the streambeds. At the same time the demand for the life-giving water grows for agriculture, industry, and the expanding suburbs.  In the thirty-some odd years I’ve been coming to Central Texas the population keeps increasing; more houses, more malls and with this expansion the burgeoning need for water.  But this is not a new story.  In San Antonio, I travelled parts of the San Antonio River Walk heading south to the Historic Missions National Park. Built in the early 18th century, close to rivers, the mission communities constructed dams and aqueducts to guide water for irrigating crops and powering flourmills.  The Belton Lake Dam on the Leon River is a 20th century version of the mission acequias; Belton just provides a lot more water for a lot more people.  The grandfather of Texas conservation, John Graves, wrote a book Goodbye to A River, published in 1959, now considered a classic about his late 1950s canoe trip down the Brazos River.  The book is often cited as a major reason only a limited number of dams were built on the Brazos. The current drought places a strain on stored water supplies.  But what can we do to make sure that there is enough water for all those  who need it, including the native plants and animals? In the 13th Century, it is believed the Anazasi left the Colorado Plateau for the Rio Grande valley of New Mexico when extreme drought caused these peoples to abandon their homes.  Where could we go?

Nomad that I appear to be, place and community do obsess me. Wherever I land, I want to understand the context of the place – the land and its people. I do not feel geographic detachment, but I realize this ability to move quickly from place to place comes at an expense. In Teaching About Place Hal Crimmel published the article “Teaching About Place in an Era of Geographical Detachment.”  Crimmel states “technology enables escape from any particular locale, accelerating the process of geographical detachment.  In fact, living in place may have more to do with restraint than passion these days.  Unprecedented access to distant energy sources, such as natural gas piped across the continent, and to mechanical or electrical technologies means people need not live within the ecological limits imposed by climate and topography.” I feel the contradiction deep in my bones; I hope my Prius buys me some credit when my judgement comes.

Sunday morning and I wake up hot. Again.  For the last few days,  Southern California has been dominated by a High Pressure system  and we won’t see relief until later this week. After moving part of my life to San Diego last year, I came to understand there are only three seasons  in the southland: rain, hot and fire.  The season of fire has come and several fires are tragically raging now in the Los Angeles Basin.  Still horizontal I begin to dream of shade trees and my mind wonders again to cooler climes of the Spring and my visits to Tomales Bay just north of San Francisco.  On Inverness Ridge, the west side of Tomales Bay and the gateway to Point Reyes National Seashore, there are coast woodlands of  Bishop pine and Douglas Fir. On the eastern side of  Tomales Bay are the open oak woodlands and grasslands with dairy and beef ranches — often visited by families of deer.  Much of this land on the eastern side has thankfully become conservation easements  protected by the Marin Agricultural Land Trust (MALT).

On this side we  also find the non-native Blue Gum Eucalyptus and the  Monterey Cypress planted by early settlers in this community to provide shelter from the winds.

On my visits to Tomales Bay, I’ve tried to quickly capture the trees and grasslands of the eastern side in watercolor and ink with a bamboo pen. 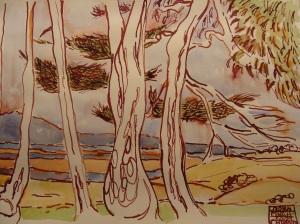 Daydreaming still, the words come from several Wendall Berry poems I’ve read in his book A Timbered Choir: The Sabbath Poems 1979 – 1997.  “I go among the trees and sit still. All my stirring becomes quiet around me like circles on water. My tasks lie in their places where I left them, asleep like cattle.”   Then as a hot breeze comes through my open window I think “of deep root and wide shadow, of bright, hot August calm, on the small, tree-ringed meadow.”   At the end of a long, hot day last Thursday, I cycled to Leucadia and then returned home.  It was a beautiful evening, and the air was still warm even as the sun set in the West.  As I started up the Torrey Pines hill on the coast highway suddenly the temperature changed drastically.  The pines nestled among the canyons of the park create  a blessed coolness  — the air felt like cool water lapping against my skin as I swam up the hill.  I was thankful for the trees whose kindness helped me ride that hill.  Rooted in the earth but reaching towards the heavens,  trees give us life.